Delivering classified material effectively and securely across the globe

The King’s Messengers are one of the most experienced and respected courier services in the world, dating back over 800 years. They’re responsible for the secure and effective delivery of the UK’s classified diplomatic material to British embassies, high commissions and consulates worldwide.

King’s Messengers accompany diplomatic bags throughout their journey. They prevent any attempts to x-ray, examine or otherwise interfere with the bags under their charge. Each King’s Messenger receives dedicated support from the UK and overseas to ensure the integrity of our Diplomatic Bag Service.

The King’s Messengers are part of our Logistics team. They travel the globe by air, land and occasionally sea in all temperatures and climates. On average, each messenger travels around 250,000 miles a year. They all have extensive experience in public service, and have a detailed knowledge of the Vienna Convention of 1961. This international treaty governs the movement of diplomatic material by all nations.

The King’s Messengers’ emblem is the silver greyhound. No-one knows where it came from for sure, but it has been the emblem for hundreds of years.

The most popular theory is that King Charles II introduced the emblem while in exile in the Netherlands. To prove the identity of 4 of his messengers to supporters in England, he broke off the 4 silver greyhounds decorating his dish. When he became King, he decreed that the greyhound would be the emblem for his messengers.

Another theory is that it comes from the greyhound featured in King Henry VII’s coat of arms.

King’s Messengers have a Badge of Office, consisting of the Sovereign’s Royal Cypher (a monogram-like design for a reigning monarch to use) with a silver greyhound suspended below. Today, messengers regularly wear the official tie depicting silver greyhounds on a blue background.

In 2017, current and retired Messengers came together with the then Foreign Secretary Boris Johnson to recognise the historic dedication of the King’s Messenger Service. 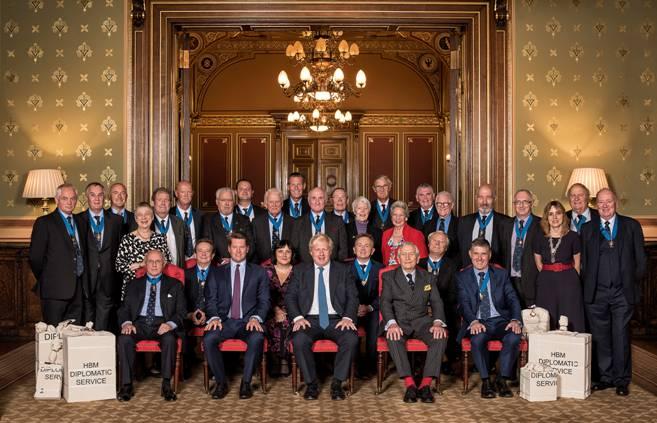 History of the King's Messengers

The role of the King’s Messenger has a long and distinguished history. First mentioned in 1199 during the reign of King John, these couriers carried items on behalf of the monarch. They allowed the King or Queen to send sensitive or secret information securely.

Find out more about our history